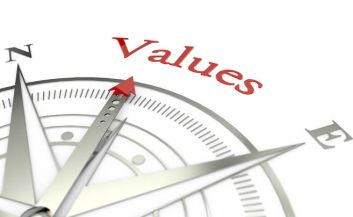 What are your company’s values?  Real values?  Regardless of the circumstances your company encounters, are these values non-negotiable?  Or do the desired values exist only on company posters and PowerPoint slides – pretty to look at, but too often sacrificed at the first sign of a challenge?

Since my high school days (a long time ago), each education institution and workplace that I have been part of has sprouted their values in one way or another. Early on I paid little regard to these values purely because I did not understand the point of having them.  However as my career progressed, various experiences showed me how influential values can be, and how rare it is for an organization to stay true to them, regardless of the business environment that the company is operating in.

From company-to-company there is usually little difference in values aspired to.  I often see high schools and primary schools with remarkably similar values to those of multi-national organizations.  I am not sure why I find it ‘remarkable’ – the list of probable values to choose from is not particularly large so there is bound to frequently be some cross-over. For example, respect is a common value; empathy is in-fashion these days; and there will usually be something linked to being innovative.

No matter what values a company selects as its guiding principles, the ability to bring them to life invariably starts and ends with having leaders who believe in the values enough to be constant role models of these behaviours.  If senior managers represent these values, and uses them as part of their decision-making process, then it is much more likely that their employees will follow suit. However should these senior managers pick-and-choose when they apply them, then the same values become a word-only concept that risk being a source of disengagement and internal mockery.

With senior managers playing such a pivotal role, what then is the responsibility of a HR team to their company’s values?

My answer to that came to me on a day off several years ago where I was super-relaxed; and feeling pretty good about things.  Then the issue of values struck.  It was not my choice for this to happen, however I ran into a colleague who I had not seen for several months and rather than beginning with the usual small chit-chat, she looked me with zero warmth and told me that the company’s values that I had spoken about on her first day of employment did not exist in her hotel, and that they were a load of nonsense (a more colourful word was used).  She was genuinely angry, and it challenged my good mood, but I knew she was right.  Completely right. We had given hope of something better but failed to back it up when it counted – beyond the posters and PowerPoint slides.  She viewed me, a representative of HR, as being an ambassador for the company’s values – and so she should.  That interaction still burns me – and it is the type of burn that I don’t want to disappear either.

That interaction significantly shaped my view that HR needs to be the guardians of their company’s values.  ‘Guardian’ is a heavy word filled with responsibility and even sacrifice, but from before each employee is recruited, through to the same individual’s final day of employment, HR has the opportunity for repeated and meaningful interactions with every single colleague.  Because of this, there is no better Department in a business to act as the guardians of values.

Though a HR team has many different functions, their responsibilities that best contribute to fulfilling the role of guardian are those of recruitment, promotions, and recognition.

The best HR practitioners I have worked with actively seek to recruit individuals who if not completely representative of the desired values, at the very least come damn close to doing so.  They understand that recruiting candidates with values similar to those of existing desirable colleagues not only gives the new employee an increased chance of successfully fitting in, but also serves to strengthen the values of the company.

Throughout the selection process these same elite HR professionals will also role model the desired values, and observe how each candidate responds to such principles – do they respond positively; do they reflect in kind; or are they oblivious to the importance of such behaviours?

When HR fails to consider values in the recruitment process then too often the result is the selection of individuals whose appointment serves to disengage existing employees, and destabilize entire teams.  Sometimes I see newly recruited individuals enter an organization with a powerful on-paper combination of experience and qualifications. They will look the part, and talk the part, but from day one there will be something missing that leads them to not quite belonging.  That missing ingredient often is what they value – what is important to them, is not what is important to the company, and the contrast in priorities can invariably lead to a toxic mismatch between employee and hotel.

If this outcome occurs regularly, then rather than being guardians of their company’s values, HR’s recruitment practices instead contribute to employees losing faith in the validity of the very same principles.

There are few topics that get a workforce talking as much as that of employee promotions.  When a deserving and suitable colleague is promoted it can create a feeling of goodwill and positivity that travels across an entire organization.  But too often poorly considered promotions result in a sentiment of incredulous deflation amongst colleagues and peers.  The employee will have the ceremony of being promoted, and everyone will smile for the camera as recognition of the moment is given, but across the company the majority of the workforce will be wondering how such an outcome can occur.

An example of this came when I found myself arguing with a HR Director who was supporting the promotion of a senior manager. I urged against such a move because in essence, the employee was fake – skilled at putting on a good show in front of certain individuals, but without the depth in ability or character to effectively lead people or a Department.  The individual was able to recite the company’s values verbatim – but in a style similar to that of a politician repeatedly spruiking their catchphrase at election time. But did this manager understand the values, or display the values?  Not even close.

The HR Director eventually proceeded with the promotion, advising me that they were tired of the individual asking to be promoted, and that it was the best way to shut them up.  At a moment when the Director should have stood up for the company’s values, they chose the personally less annoying option, and in essence communicated to employees that displaying such values was not a key ingredient to career progression.  It was a galling moment for many within the organization.

The final say with promotions is rarely that of HR – usually it rightfully goes to the senior manager of each Department.  But if a set of values are to be respected within an organization, then before promoting anyone, a HR team has the responsibility to hold that individual up to the light of those said values, and ask:

The best HR professionals will ask and answer such questions in front of key influencers.  They will take the responsibility to look through the politics, the maneuvering, and the person who puts on a show to say the right words in front of the right people. They do so knowing that although they may not win every promotion debate, the act of engaging in the values discussion sets a positive precedent that communicates to all managers that every single suggested promotion will be scrutinized with the same set of guiding principle criteria.

In every hotel there are a group of individuals who for various reasons are skilled at receiving more positive attention than what their colleagues gain.  These will be the staff who have the sometimes annoying habits of getting more guests to remember their names for use on guest feedback forums; and in having their better performances constantly noticed by senior managers.

Most HR individuals I have worked with tend to be drawn into providing more recognition to such individuals.  Now this is not necessarily a negative thing – this recognition is often deserved.

However a sufficiently interested and aware HR professional will put themselves in a position to recognize the efforts of allof their people.  They will observe the Housekeeper staying back to help a colleague with an excessively messy room; the Commissary Chef working diligently to prepare food for the 500-person function; and the Telephone Operator skillfully handling a guest screaming at them for a problem that they were not responsible for. In every Department, at every level, they will see their staff demonstrating their company’s values, and in these moments, they will take the opportunity to provide due recognition.

This recognition does not need to be a massive demonstration of gratitude.  Indeed often these employees will be so humble and unassuming, that acts of over-the-top gratitude would be horrifyingly uncomfortable for them.  Instead, it can be a quiet word of encouragement; a hand-written note of reinforcement to the individual; a word to inform their boss – essentially anything that lets the individual know that their behaviours are exactly what the company wants; that we see the good in what they have done; that they are appreciated; and that we need more of it.

By being actively aware of the efforts of all Departments, HR position themselves to communicate that values matter across the entire hotel; and that employees who demonstrate such values will be recognized and appreciated regardless of job title or skill set.

In comparing one company’s values to another I do not pay much attention to which values have actually selected.  Rather, I am more interested in who is successful in bringing their values to life; who is effective at creating an environment where their employees believe in these values; and in challenging times, which companies sacrifices their values, and which ones galvanize themselves to protect them?

For HR teams, ask yourself what are you doing to protect, grow, and role-model your values?  Does your approach to recruitment, promotions, and recognition enhance your company’s values, or do they serve to undermine them?

And finally, and perhaps most importantly, are you personally stepping up to battle for your company’s values when you need to? Or are you rolling over each time your values are threatened? After all, guardians do not drop to their knees without a fight…