Ever been given this advice?  Provided this advice to someone else?   Burnt a bridge or had someone burn the bridge connecting them to you?

Usually we associate this phrase with a volatile action from an employee before or after they leave an employer.  Burning bridges though can be a two-way street, with the more damaging approach often coming not from employees, but rather from managers towards their employees.

This is particularly the case with employee resignations, where receiving such news can be a genuine test of a manager’s composure.  Some will pass this test, responding in a manner that takes into account the best interests of all parties; whereas others will fail by resorting to a variety of bridge-busting tactics.  These tactics can range from one end of the scale in the form of refusing to ‘accept’ the resignation or ceasing to talk to the employee – through to the more vindictive responses of removing entitlements; or gathering multiple other managers to essentially bully the individual into reversing their decision.

The most extreme response I witnessed though came from a manager who responded to an employee resignation by repeatedly, and aggressively threatening the individual with what was unjustified legal action.  What made the response so baffling was that for months the manager had openly discussed their desire to terminate the individual – so the employee resigning should have been a win-win outcome.  But instead, and ignoring the employee’s considerable contributions to the organization, and their textbook professional resignation, the manager’s ego rendered him unable to accept that any employee had control over the circumstances in which they left the company.

This manager made the mistake of taking the resignation personally rather than professionally.  When this occurs, a manager’s response can become similar to the emotional situation of being dumped by a partner in a personal relationship.  Outbursts will be used such as ‘why are you leaving me?’ ‘You won’t find anything better out there!’  ‘I am the one who developed you!’  It always leaves me bemused when I hear of managers saying this last line.  If you have developed your employee, well, congratulations, it means you were doing your job.  Nothing more. 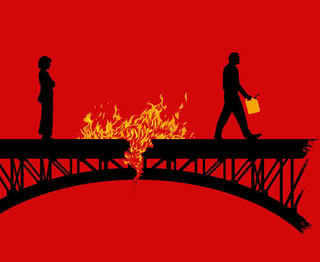 So instead of acting with petulance when an employee resigns, there are a number of steps managers can take to respond in a more constructive, and relationship-conserving manner.

I encountered this several years ago when a tremendously talented and mature young chef (Katie) walked into my office with a box of tissues (never a good sign). We had identified Katie as a rising star, and so as she sat there informing me of her resignation, I could feel my stomach dropping at the realization that we were losing a fantastic professional with the priceless ability to make her colleagues walk taller when she was on shift.

Katie explained to me that there were two reasons for her choosing to depart.  Firstly, when she looked at the excessive working hours of the senior chefs, and the lack of a life that they had, she knew that she did not want that for herself. Secondly, she wanted to travel – seriously travel.  Not for a week-long tourist trip to Bali or Thailand, but to drop everything and explore Europe for months, perhaps years.  There was no point in trying to convince her to stay.  The same characteristics that had made her such a wonderful employee, had ensured that she had thoroughly considered what she wanted her future to look like.  All I could do was feel sorry for myself and the company, but at the same time be impressed that she had worked out what she wanted.

Katie was resigning so that she could chase her real ambitions, and I had to be realistic enough to know that nothing we offered her could compete with her own priorities and desires.

Instead of this one-way view, consider the great work that they have done; the extra hours and workload they accepted; the flexibility they demonstrated; and the sacrifices they made for the team.

Then, graciously acknowledge the employee’s efforts both one-on-one, and in front of the entire team so to provide your department with a positive message that communicates that whilst you are not happy that the individual is leaving, you nonetheless appreciate their significant contributions.

If you do want your employee to stay, go about it with honesty by telling them what you can actually bring to life; not with unrealistic commitments that will inevitably create future problems, and provide the employee with justifiably negative sentiments towards the company.

If the individual is one who I want to stay, then along with asking such questions I will tell them that this is my preference, and that we are a better team with them in it – it is important for their own sense of value that they hear this.  However if the employee has been a nightmare to work with, then better to ask no such questions, just take the resignation letter and hold a private celebration in your head.

By handling a potentially difficult resignation with class, you create a positive final impression that can have long-term benefits for your organization.  For if the departing employee goes to work even for a competitor, they will almost certainly develop their skills and knowledge to the point that should they ever come back to your company, they will be of even more value than when they left you.  So that final impression that you created during their resignation, coupled with a positive overall experience with your company, can be enough to make them return in the future.

Of course there will be ill-considered resignations that make several of these suggested steps less relevant.  But in most cases, when your employee resigns it is something that is right for them, and is a decision that they have been considering for weeks, and sometimes months.  Yes, it would be preferred if they were not leaving, and it would certainly make life easier for your team.  However, is their departure going to break your department?  Do you really rely so heavily on this one person?  Or in a round-about way, is it an opportunity to find a great new addition to your team, provide new responsibilities to other team members, and drive your department forward once again?

So be the manager that demonstrates commitment to employees from their first day, all the way through to their final day.  This consistency in attitude can be the difference between having an individual being an ambassador for your company even when they are no longer working for you, and having someone who openly sways potential employees from joining your company.  It can also be the difference between having a wonderful ex-employee returning to your company when the time is right; and having that same individual who because of your bridge-burning reactions, never again sets foot in your organization.